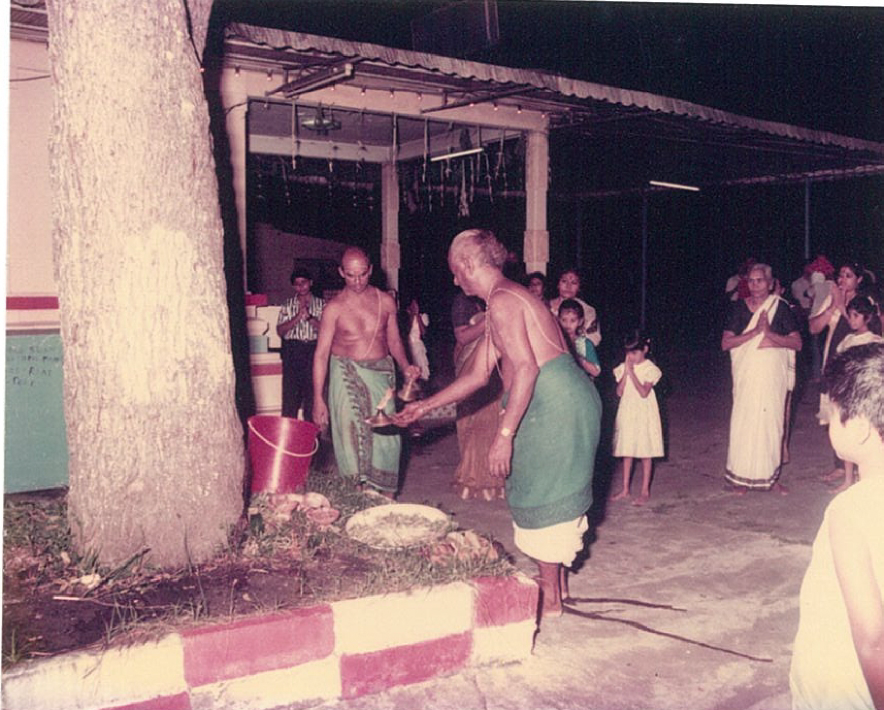 In 1962, on the eve of Pongal (harvest festival) Mr. P. Karupiah, a worker in the British Royal Navy Dockyard, had a momentous dream. In his dream, he saw a vivid image of Lord Murugan and a majestic golden cobra (Rajanagam), seated below a particular Elanthamaram in the swampy mangrove area west of Canberra Road. Inspired by this divine vision, on the auspicious day of Pongal, Mr. P. Karupiah went to the Elanthamaram and constructed a very simple altar at the base of the tree. Significantly, the tree had six main branches symbolizing its link to Lord Murugan, also known as Arumugam or Shanmukha.

On his makeshift altar, Mr Karupiah placed pictures of the deities Vinayager, Ambal, Lord Shiva, Lord Murugan and a large “Vel” (divine spear). From that day forth, he began daily prayers at this symbolic site. Over a very short period of time, what began as a single individual’s act of devotion grew into something far more significant. Word of the simple altar and the fact that daily evening prayers were being conducted there spread amongst the Hindu workers in the Royal Navy Dockyard. Many of them lived in the quarters provided by the British and their homes were within walking distance of the temple. Not surprisingly, they soon flocked to the temple. These were the humble pioneers of the Holy Tree Sri Balasubramaniar Temple. 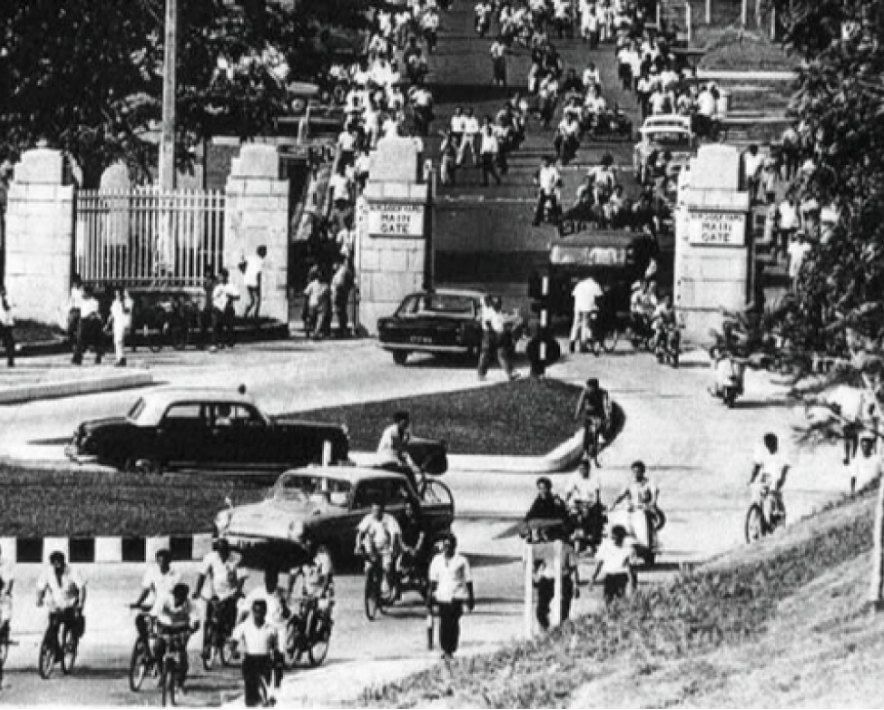 In an effort to provide for the needs of the growing number of devotees, an interim committee was formed. Interestingly, even the Commodore of Her Majesty’s Naval Dockyard was involved in our pioneering efforts. After an appeal was made by the devotees, he allowed the site to be officially designated as a place of worship. A small shed was built around the Elanthamaram, and it became known as the Punitha Maram (Holy Tree) Sri Balasubramaniar Temple.

In 1964, the temple was officially registered and Mr. S. Saravanan became the first Honorary President. His elected Management Committee was tasked with the project of building the temple. With the enthusiastic support of the members and devotees, the building project was initiated. The Commodore of the Royal Navy and the Superintendent of HMN Dockyard continued to support the temple by contributing building materials and catering to the logistics needs of the project. 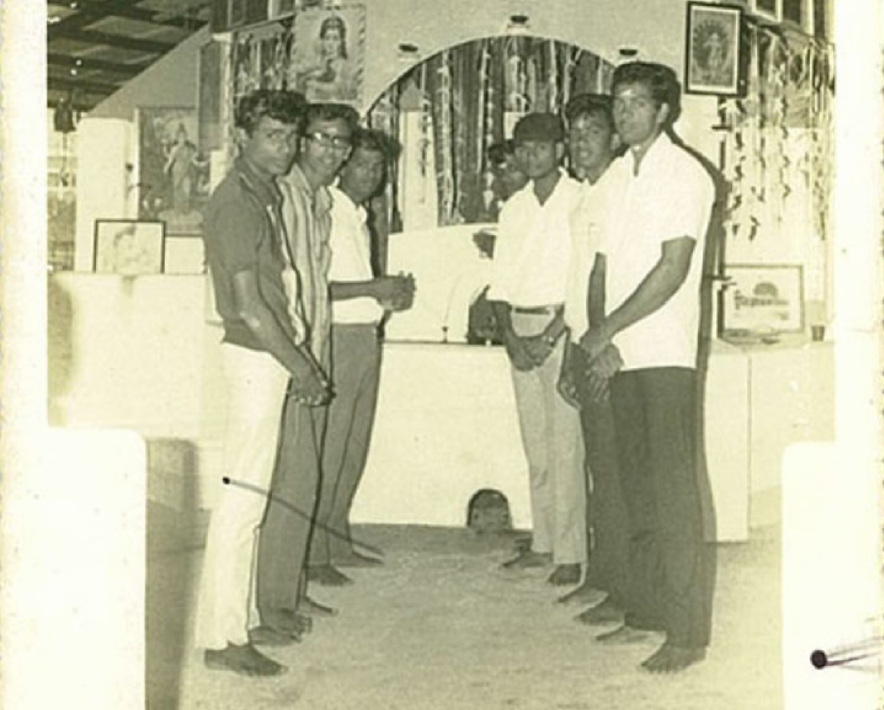 In essence, our pioneers comprised of a small group of very dedicated devotees whose singular drive and back-breaking efforts contributed to the growth of the temple. The Pangunni Uthiram (name of a month and a star) festival was first celebrated in the temple in 1967. With the assistance of Sivasamy Pandaram, the annual pilgrimage began with six youths who carried the kavadi in honor of Sri Balasubramaniar. The temple celebrated its first Kumbabishegam (consecration) in March 1971. For nine tireless years, under the guidance of Mr Saravanan, the committee laid down the foundations of the temple.

In 1973, Mr. S. Saravanan stood down as the president. His successor, a young lawyer, Mr. Subhas Anandan, was elected as the new president. This marked the beginning of a younger generation of members leading the temple in its next phase of development. Under Mr. Anandan’s leadership, the management committee established the Youth Wing. The bulk of the organization and administration began to be undertaken by these dedicated young devotees. The temple began to expand its scope by catering to the socio-cultural needs of the community. Religious classes, Bhajan sessions and other cultural activities blossomed under the young vibrant committee. 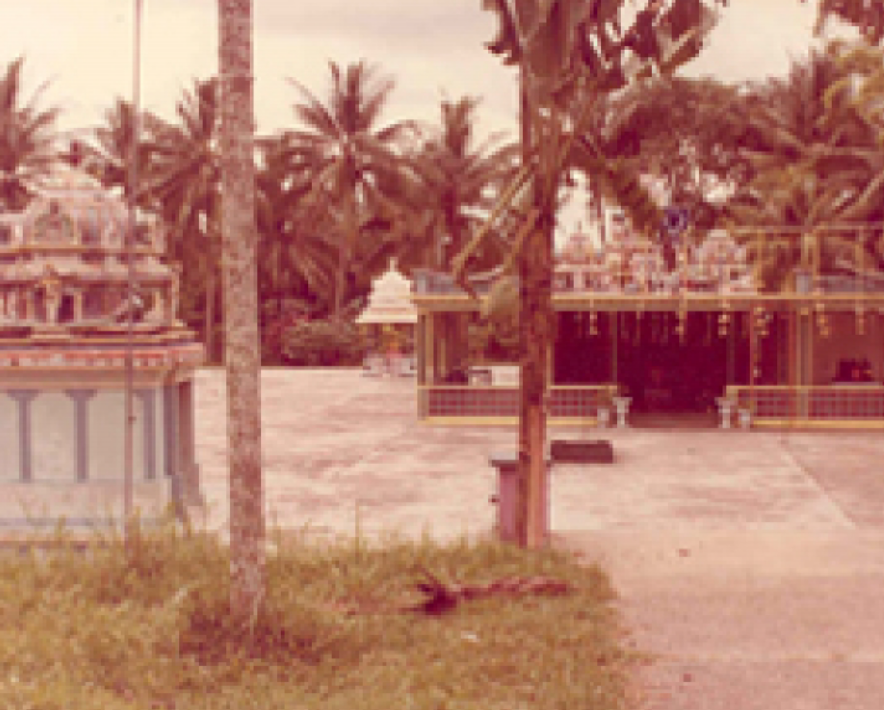 In 1976, Mr E. Narainasamy, a pioneer member, was elected as the President of the temple. He had a very young Management Committee which decided to embark on restructuring and renovating the temple. Eminent religious authorities were consulted and they indicated that the existing edifice had to be re-aligned as the Shastras (Hindu sacred scriptures) indicated that the temple had certain inherent architectural defects. The vast architectural experience of ‘stapathis’ (temple architects and builders) Chidambaranathan and Madhaven Achary from Tamil Nadu was engaged and the temple was renovated. With the blessings of Sri Balasubramaniar, the second Kumbabishegam was held in November 1977 and was conducted by the renowned Sri Ayamani Sivam from Tamil Nadu. He was assisted by Chandrasekhar ‘Gurukal’ and other eminent Gurukals’ from India, Malaysia and Singapore. 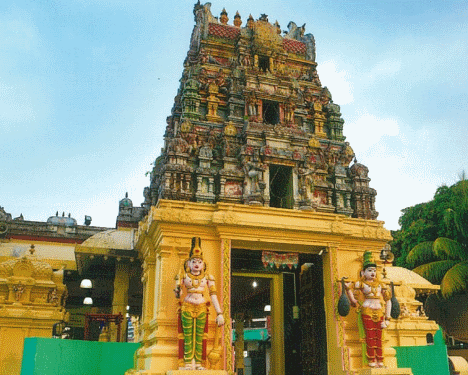 In 1985, Mr Doraisami became president. He was one of the pioneer members who served the temple and management committee. After his tenure, Mr E Narainasamy was appointed as President. Plans were drawn up for the 3rd Kumbabishegam. On the 26th of January 1996, the temple shifted from Canberra Road to Yishun Industrial Park A, its present location. This plot of land was purchased for $408,000. The construction of the new temple was completed at an estimated cost of about $3.5 million and the 3rd Kumbabishegam was conducted on 29th August 1999. After 1999, the temple constructed four new sanctums. They are the Durga, Hanuman, Periyatchi and Ayyapan sanctums. These sanctums were set up to cater to the spiritual needs of the Hindus in the region. The move from Sembawang to the Yishun area also brought the temple closer to other places of worship. This area in Yishun was home to a few Chinese temples, a mosque namely the Masjid Darul Makmur mosque, a Sikh temple and another 2 Hindu temples.

Over time, due to the inevitable pressures of wear and tear, the temple building began to face many infrastructural problems. Though maintenance work was being carried out regularly, there was a need to address serious underlying problems related to electricity and drainage issues. In addition, over the years, the number of people who participated in the Pangunni Uthiram festival increased exponentially. Pangunni Uthiram is a signature event in our temple and the committee needed to look into ensuring that its infrastructure was improved and even customised to meet the demands of the festival. The decision to build an entirely new temple was decided upon. 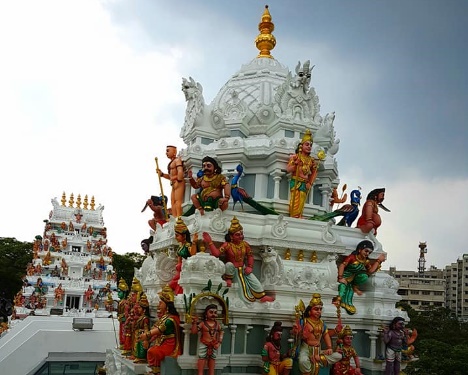 In April 2015 the demolition works began. In August 2015 the Bhoomi Pooja followed by the Adikal Nathu Pooja was conducted. These prayers commemorate the laying of the bricks to begin the building process.

The Phalastapanam Pooja was conducted in November 2017. In this ceremony, gemstones are placed in the lower peedam (Foundation of the idol).

Even as the temple was being constructed, the annex building project was completed and the Multi-Purpose Hall was opened in November 2016. 18 years after the last Kumbabishegam, today, the 11th of February 2018, on the auspicious day of the 4th Maha Kumbabishegam of The Holy Tree Sri Balasubramaniar Temple, we are proud to present to you Our Temple, A Home in Our Community. 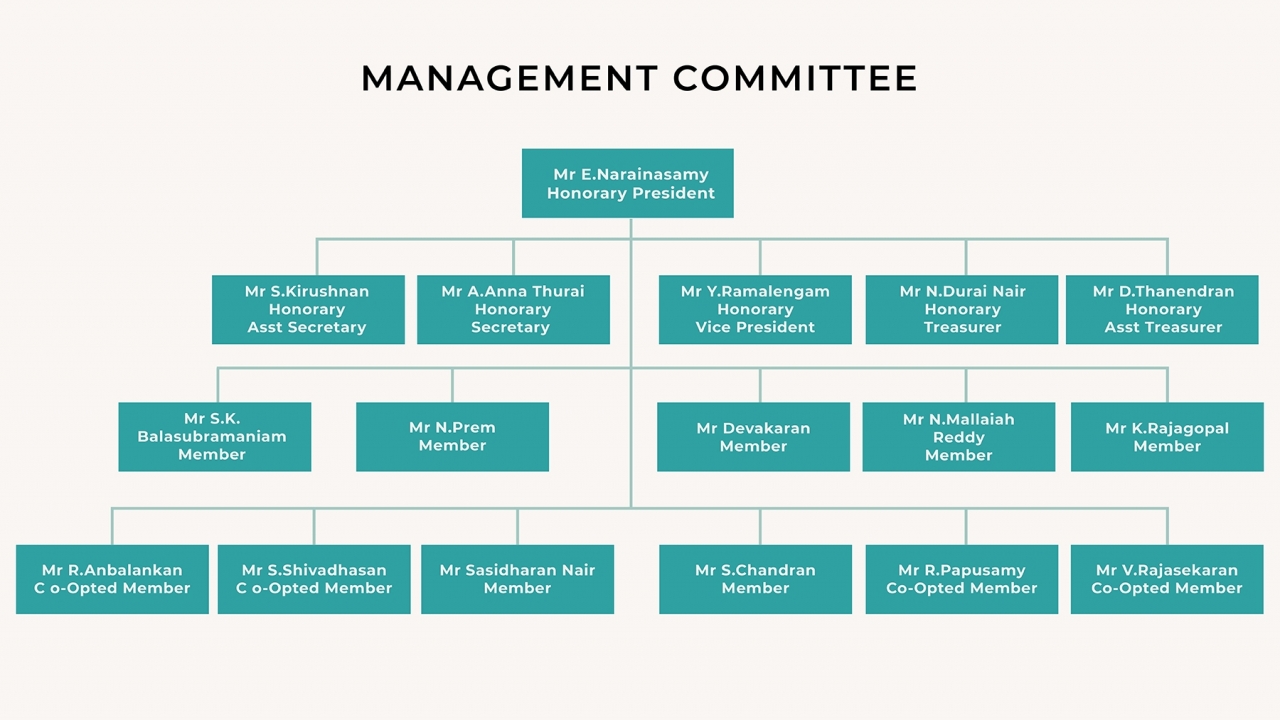 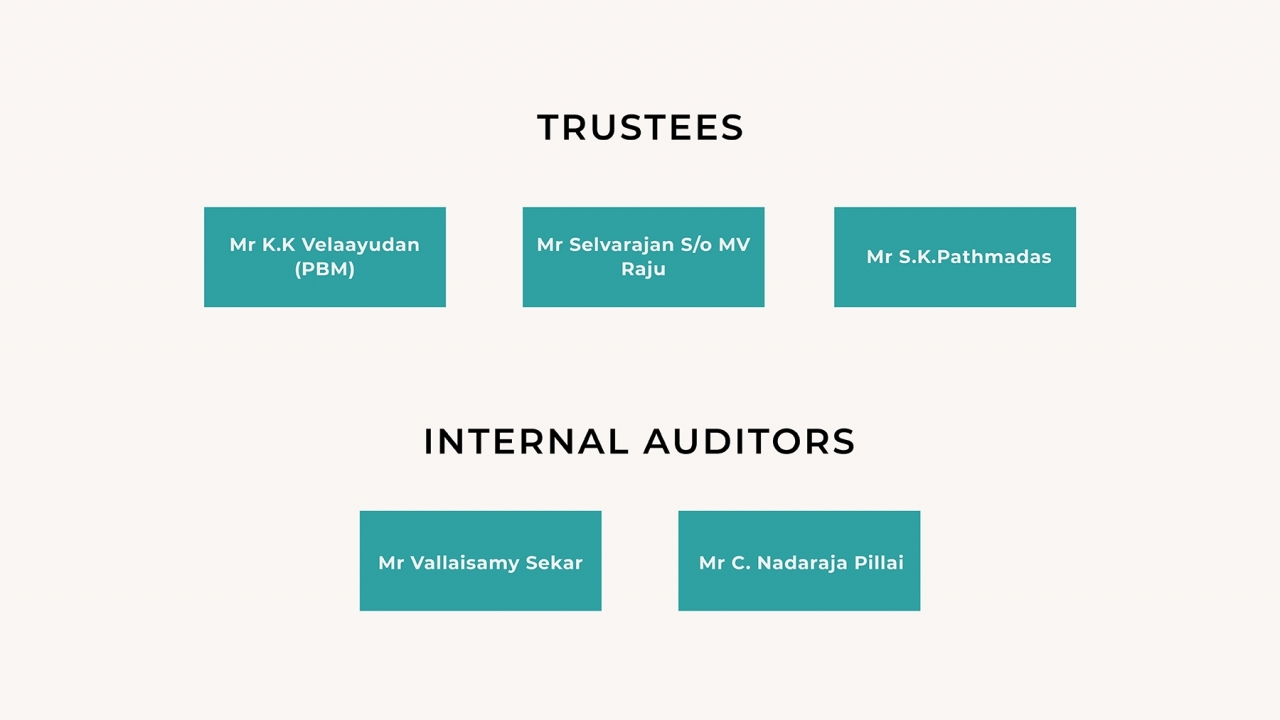